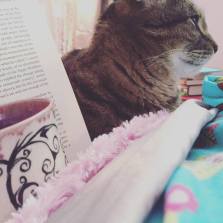 I have been preparing myself for this moment for just about a year, when the tiny lump on JJ’s hip was diagnosed as cancer. The vet told me he might only have a few weeks, and he went on to spend another 53 weeks with me.  I have never been so acutely aware of my gratitude for the gift of time.

In February of 2005, I was living outside of Minneapolis.  Eight months earlier, I had moved 1000 miles across the country to take a job that was now finally starting to let up in intensity.  I decided it was time to look at adopting a cat.  I drove up to Maple Grove – about 30 minutes north of where I lived – because I liked the Super Target up there and I knew there was a Pet Smart nearby.  I would just look.  I would take my time making a decision.  After all, this cat that I adopted at the age of 27 would be with me through much of my formative adulthood.

I walked into the cat adoption enclosure at PetSmart and I immediately heard a very loud, “MMMRRROOOWWW”.  (This was not a simple “Meow”.)  The big brown & grey tabby cat from which the sound emerged was just standing up in his cage looking me straight in the eyes.  His green eyes were amazing – and he didn’t seem angry or sad or excited.  He just demanded attention.  The name tag on the cage told me that the cat was named Jason.  (My closest friend at the time was also named Jason, and it felt like a little bit of fate intervening.)

The employee asked if I wanted to meet any of the cats, and I asked about Jason.  She told me that he was the last of four identical brothers, 10 months old, and ready for immediate adoption.  She opened the cage and before I could even reach in to pet him, he crawled up on my shoulder and made himself at home.  It was, I thought, definitely fate.  I renamed him JJ, because a cat named Jason was weird.  A few weeks later, my friend Joe stopped by my apartment to pick something up, and upon entering the apartment, JJ immediately crawled from the countertop to Joe’s shoulder.  Turns out that is just a thing he did.  I wasn’t exactly as special as I thought.

Two weeks after adopting JJ, I adopted a tiny 6 month old kitten named Dulcie, who became Ava.  Ava was – from the very first day – JJ’s cat.  She tolerated me – and sometimes even liked me – but she loved JJ.

A lot of miles, moves, and milestones

JJ and Ava have been with me through five moves, including the 1000 miles back home to PA less than a year after I adopted them.  They were with me when I bought my first house.  They adapted to a full house when my sister, brother-in-law, nieces and two dogs moved in with us for a few months.  Ava spent most of her life hiding, but JJ just held his ground with toddlers and dogs alike.

For the past 14 years, JJ slept beside me virtually every night – most recently sleeping on my shoulder and up against my face until he thought I was asleep, and then getting down to sleep in his own bed in the corner of the room.  He was a terrible nursemaid when I was sick, because he thought that sleeping on my chest or face could fix whatever ailed me; but I almost always let him do it anyway.  In the 14 years that we had together, we both changed a lot.  We both settled down.  We both slowed down.  We both got a bit bigger.

He was my Instragram inspiration, my beloved pet, and my very best friend.

I have been preparing for this moment for a year, but I am not prepared. 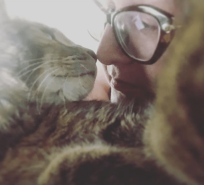 And so I have been preparing to let him go for the past year.  Every time he started to get on my nerves by being too clingy, for meowing too loudly, or for waking me up in the middle of the night, I reminded myself that I didn’t have forever with him.  I genuinely cherished each moment in a way that I wished I had been able to do with people in my life over the years.

And so today I said goodbye to my sweet boy.  JJ.  Jay-gers.  Jayge.  I’ve had so many pets before him, and I will have many more come.  But no one will take his place.